For an authentically local way to experience the thriving city of Bangkok, escape the chaos of the land and embrace the chaos of the river. Join travel photojournalist David Bowden as he buys a ticket on the Chao Phraya Express and sees the sights of one of Southeast Asia’s most dynamic cities.

During the rainy season, it becomes very apparent just how low-lying the Thai capital of Bangkok is (the average height in the city above sea level is just 1.5 metres). During the rainy season, flooding is something almost everyone in Bangkok experiences as there simply isn’t much leeway for floodwaters to flow away into the Gulf of Thailand. 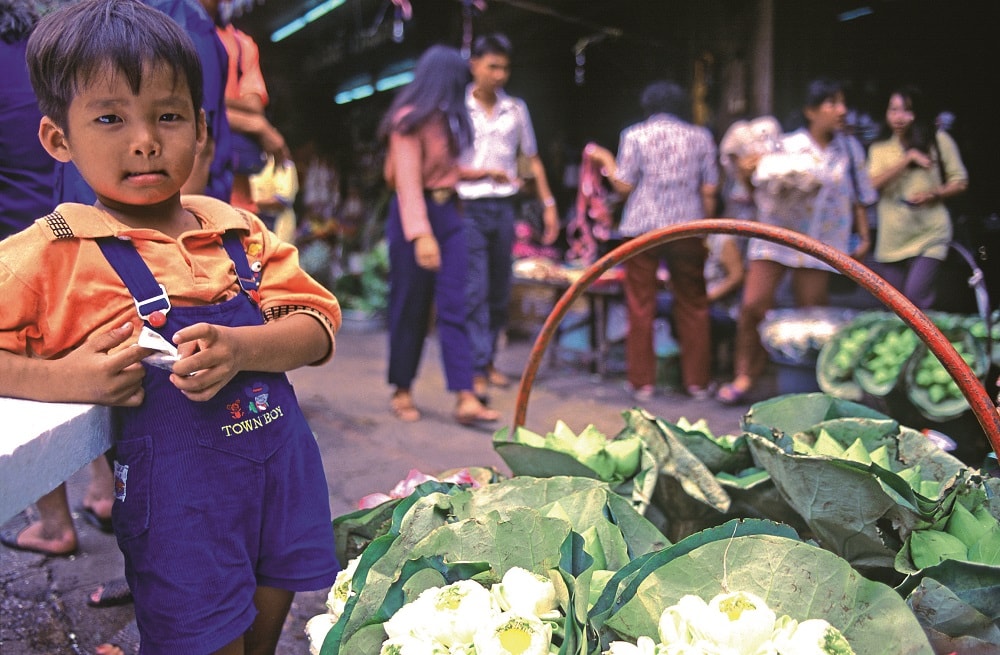 The river as it exists today is not as it was originally, as at least one canal was cut to shorten the distance between meanders in the river. Various smaller klongs, alternately spelled as khlongs, are canals which radiate from the main river, with many of these serviced by ferry boats, often quite brightly coloured. One of the best places to see a klong and the ferry boats which use them is from the Hua Chang Bridge that crosses Phayathai Road between Siam Square on Rama 1 Road and Ratchathewi Junction on Phetchburi Road. Use the VIE Hotel as a landmark and there is a ferry stop below the bridge on the southwest bank for the adventurous few who want to take this journey all the way through to the Chao Phraya River.

Apart from when the river is in flood, a boat journey down the Chao Phraya River is one of the best ways to take in many of the city sights and to appreciate just how important the river is to life in the city. 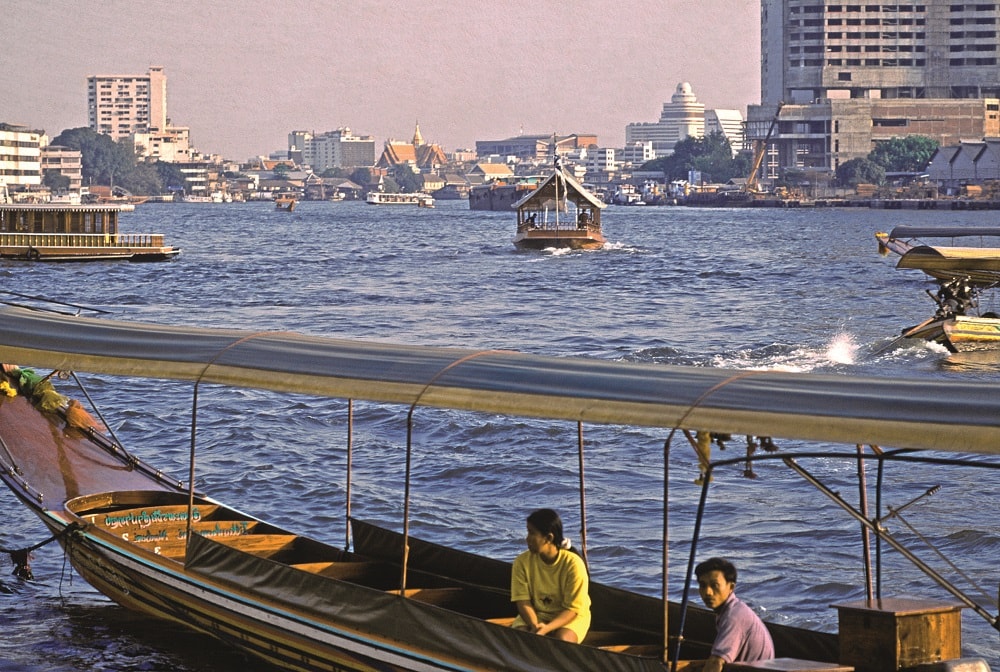 The Chao Phraya River with clumps of water hyacinth floating along the surface is one of constant activity during daylight hours. Ferry boats criss-cross the flowing water while others zip up and down, moving people and goods to the various ferry stops along the riverbanks.

One of the most recognised forms of river transportation is the Chao Phraya Express and first time visitors should use a journey on the Express as a way of orienting themselves to the vastness of the city but without the traffic jams presented on the land. The Chao Phraya Express Boat offers an efficient river transportation service along the river. It provides riverine express transportation between stops from Rat Burana District in the capital city of Bangkok to Pak Kret District in Nonthaburi, the province immediately to the north. 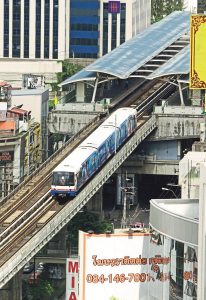 Sathon Pier offers the best connection to the BTS Skytrain at Saphan Thaksin Station. Known as Central Pier Sathon (Thaksin), it is located at the eastern side of King Thaksin Bridge with the Hotel Shangri-la just to the north of the bridge pier and BTS Station, the best landmark. Ferry boats go north and south of here with stop number 33 or Pakkret (at the base of Rama IV Bridge) as the last stop to the north.

Established in 1971, the Chao Phraya Express Boat Company mostly provides a service to local commuters but is becoming increasingly popular with tourists. The 21-km route is serviced by express boats from 6.00am to 9.30pm during the weekend and 6.00am to 6.40pm on weekends and holidays.

The ticket covering the whole route from Pakkret to Sathon only costs about RM4 (tickets can be purchased from some counters at piers on the bank or from the conductor on the ferry), so it offers one of the best-value public transport journeys in Asia.

The route passes several bridges such as the Krung Thon, Rama V111,

Somdet Phra Pin Klao, Rama V and Bhumibol Bridges. It is a convenient way to see some of Bangkok’s iconic sights such as Wat Arun, the Grand Palace, Wat Pho and the Flower Market.

Stay at hotels such as the Mandarin Oriental, Royal Orchid Sheraton, Millennium Hilton, Chatrium Riverside and The Peninsula and use the express boats as a way of moving along and about the river. Visit shopping precincts such as the River City Bangkok and Asiatique via the Chao Phraya Express. 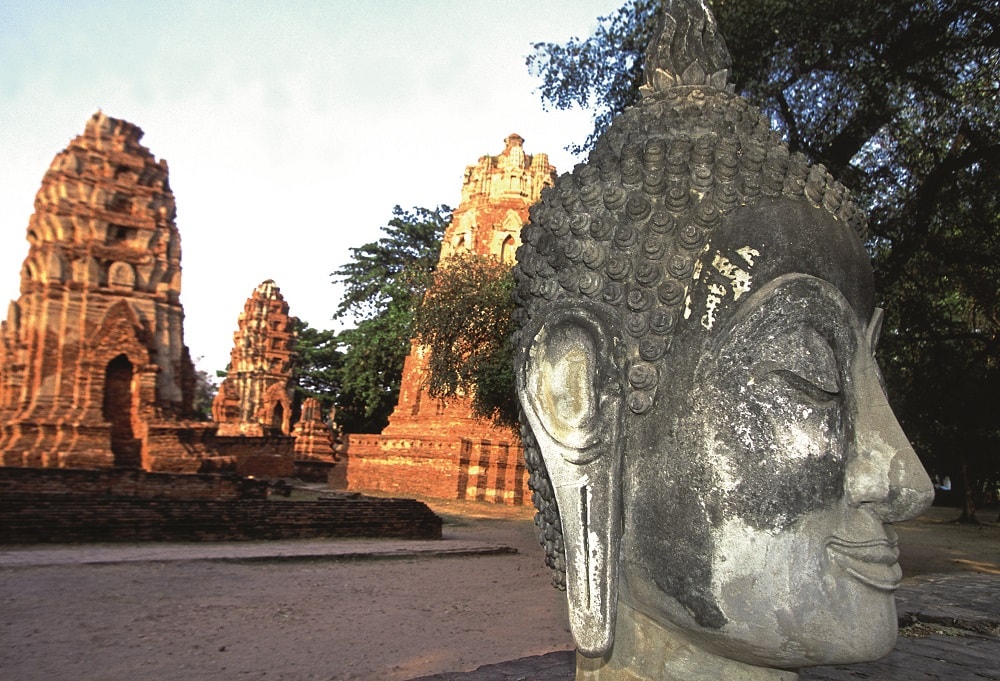 The Chao Phraya Express boats are sleek, narrow (3m wide by 30m long), mostly wooden vessels that travel up and down the waterway to provide the best access to locations along the river.

Smaller boats operate across the river to connect those living along one side of the river with the other and it takes a little care at first to ensure you are at the correct ferry terminal. As a general rule, the cross-river ferries are smaller and slower than the Chao Phraya River ferry, which moves rapidly along the river and announces its impending arrival with lots of horn-tooting. The boat crew tend to take a no-nonsense approaching to pulling in and out of the wharves, with things done as quickly as possible, so passengers need to be in the starting blocks and ready for getting on and off.

Ferry boats of the Chao Phraya Express can accommodate between 90 to 120 passengers. The external area at the rear of the boat is for those getting on and off and it’s a good idea not to linger here. 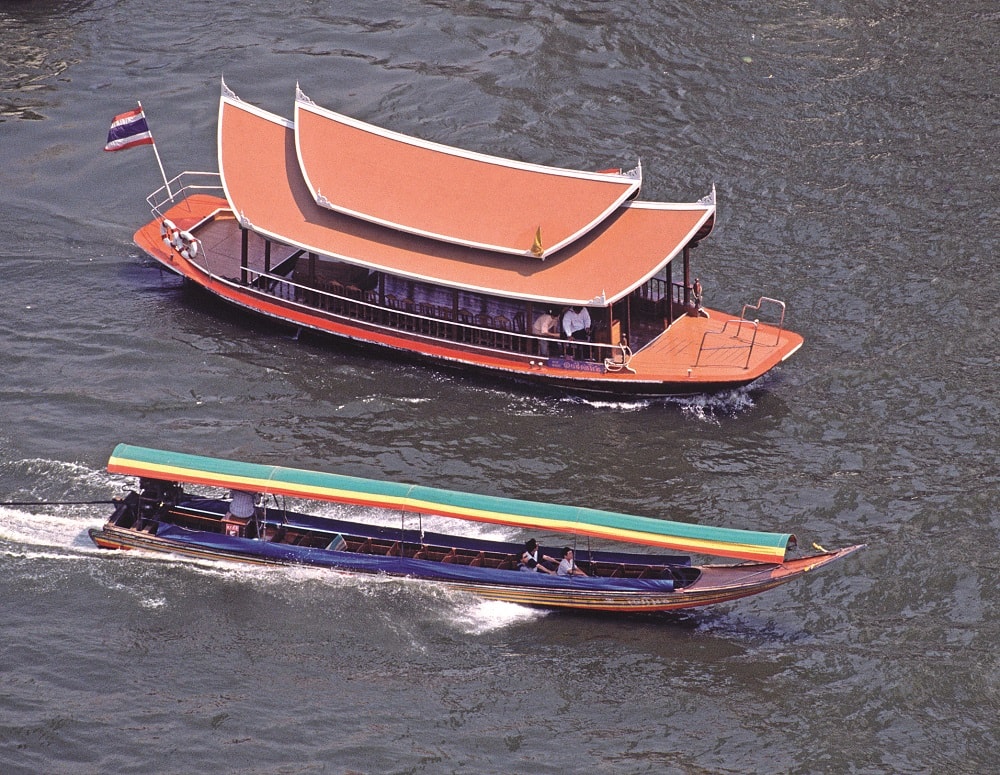 Double seating is located on either side of a central aisle. Larger boats that accommodate 120 to 180 passengers also operate on the service, with the ferry captain seated in a raised section above the passenger deck. The best seats on these boats are at the front as the driver does not obstruct the view like he does on the smaller boats. Naturally, these boats are longer and wider with two aisles than others in the fleet.

Above all, don’t be intimidated by unfamiliarity. This is a terrific way to see Bangkok, and some who have visited the city multiple times before getting around to taking river journeys here regret not having tried it sooner. Riding the express boat for several stops to get oriented to the route and the attractions along the way is recommended or simply ride it until you have had enough and then alight and catch the next ferry in the reverse direction to the point where you started. This is definitely one of the most invigorating – and cheapest – ways of exploring Bangkok’s riverside districts.

This article was originally published in The Expat magazine (February 2017) which is available online or in print via a free subscription.