North of Manila, in the Cordillera region of Luzon island, an alluring mountain playground beckons. Particularly appealing for golfers, Baguio offers a welcome respite from the heat and chaos of the city. Drawing comparisons to Cameron Highlands and the American Rocky Mountains in equal measure, David Bowden checks in to a rustic luxury resort and enjoys the best of the Philippines at altitude.

Baguio was established at the turn of the 20th century by Americans as a hill station to escape the heat of Manila in much the same way – and for much the same reason – as the British established Cameron Highlands in Malaysia. For the following decade, the American government in the Philippines would transfer its entire operations from Manila to Baguio during the hottest part of the year, making it in effect the seasonal capital of the Philippines.

The mountainous area adjoining Baguio is named after the former United States Armed Forces base that once operated on the site. Camp John Hay was formerly a destination where American military personnel rested in the soothing mountain air. It opened in 1903 and was named after President Theodore Roosevelt’s Secretary of State. It was also the first place in the Philippines to be bombed by the Japanese during World War II. Though the base was handed back to the Philippines government in 1991, the United States Ambassador to the Philippines still maintains a summer house here.

Local Filipinos, especially those from the teeming urban metropolis of Manila, flock to the mountains of Baguio City at the weekends, keen to enjoy the cool and less humid air of this hill station that’s situated some 1,500 to 1,700m above sea level. This means that outdoor activities are more appealing in the cool, fresh mountain air, while the nation’s golfing elite choose to travel here to play a few rounds of golf on the picturesque 18-hole championship course located high up in the mountains. The golf course is known as the Augusta of the Philippines and is the course many local golfers aspire to play on. 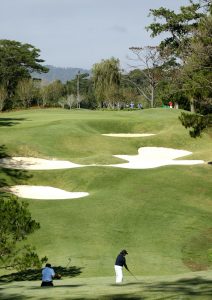 The golf course at the Camp John Hay Golf and Country Club looks like it has been there forever, although Jack Nicklaus only crafted it into its current masterpiece state in 1998. Prior to this, golfers played on an old course that had been there since it was a military base.

This means it has mature vegetation, with the course featuring well-established pine forests which provide ample shade but also contribute to the course’s rather tight fairways. Nicklaus’s redesign, in fact, included widening some fairways and capping them with sand to enable all-weather golfing.

The par 69 course is now considered one of the best on the whole of Luzon Island, and it is best known for its undulating terrain, narrow fairways, and lightning-fast Bent Grass greens. Just as in Augusta (USA), the greens are speedy and sloping and quite difficult to master even for short handicap golfers.

Players also need to factor in that balls will travel a bit further (relative to sea level) in the thinner mountainous air. While electric golf carts are available, many golfers choose to walk and enjoy the novelty of playing without the heat and humidity so typical of lowland courses. The assistance and advice provided by the all-male caddies, decked out in traditional Augusta white attire, is usually appreciated by golfers playing the course for the first time.

The course’s 280m-long, par 4 third hole is ranked amongst the top 10 holes in the country, but according to club regulars, the 330m-long par 4 ninth hole is the most challenging. This narrow fairway weaves through mature pine forests and the bunkers and its severe green can play havoc with the scorecard. Like many holes, it’s possible to drive straight onto the green but then putt out with a double bogey. While the clubhouse is designed along the lines of a log cabin, it doesn’t look out of place despite its tropical location. 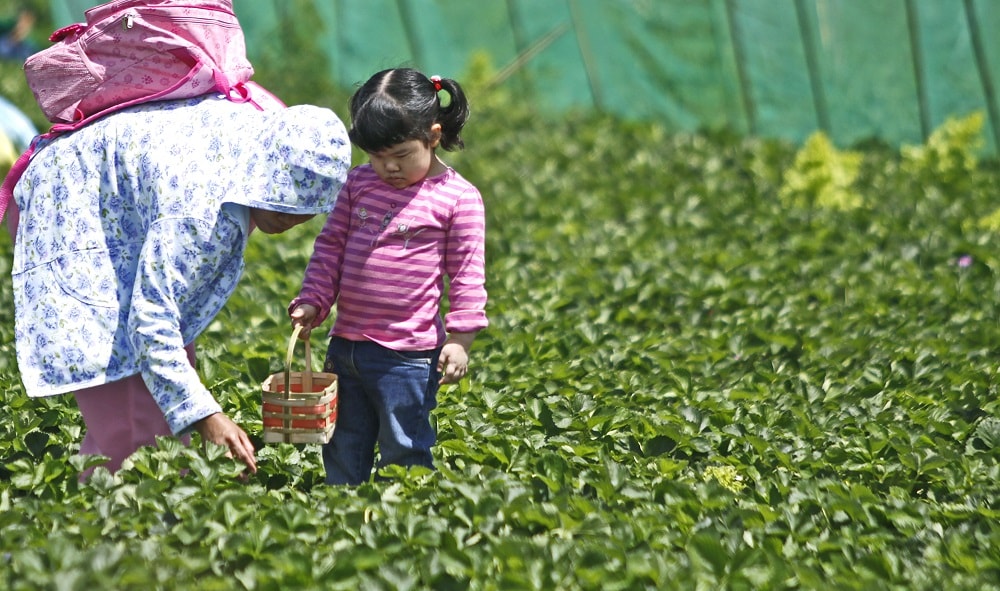 While golf is a very good reason for visiting Baguio, other activities include visiting the local markets, walking along mountain trails and buying fresh vegetables and fruits that thrive in the temperate climate. Many people avoid over-exerting themselves in the tropics, but Baguio’s cooler temperatures make it appealing to walkers with the Eco Trail being the best place to start exploring, while walking along the roads around the golf course are best suited to those who don’t like going off-road. Forest trails weave beneath towering pine trees, and there is a bridle trail for horse riding through the lush Kabadjo Forest. 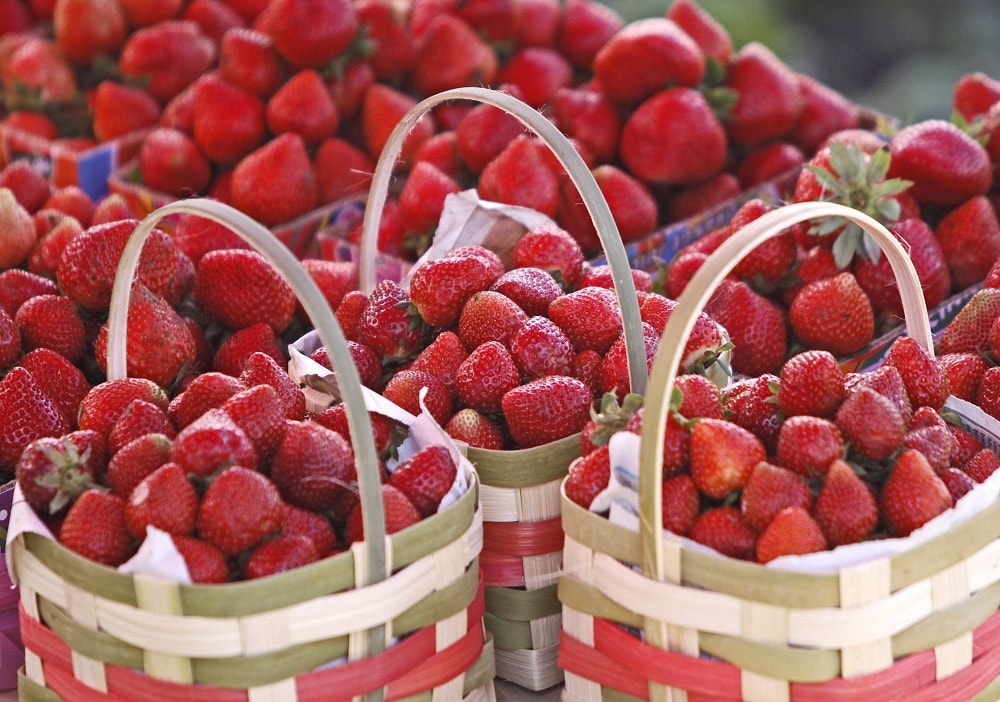 Just out of town on the road to the isolated mountainous retreat of Sagada, there are fields of strawberries where visitors can enjoy picking their own berries for a small fee. It’s a great family activity where everyone can join in and strawberry products and strawberry-themed souvenirs of every description are also available. The most persistent of the vendors sell freshly made strawberry ice cream to enthusiastic children. Families will also find a lot of enjoyment in visiting the Butterfly Sanctuary. 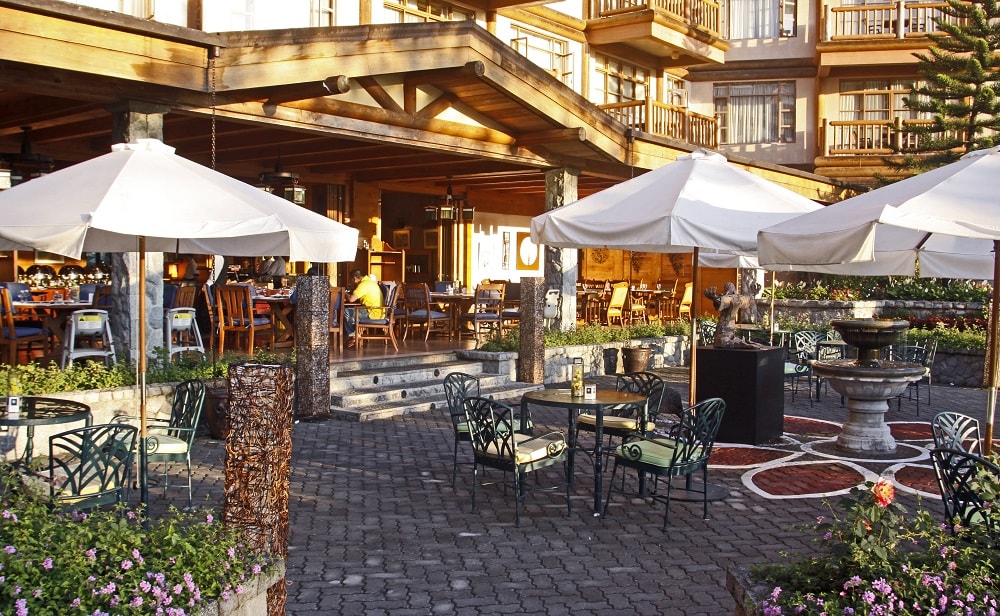 Discerning travellers will choose to stay at the five-star The Manor Hotel Camp John Hay and thus avoid the crowded and noisy Baguio city centre. The Manor looks like it should be located in the American Rocky Mountains rather than the Filipino Highlands, and while the hotel is still relatively new, it manages to incorporate age-old qualities befitting a grand heritage property. This 177-room hotel is a low-rise property which looks comfortably at home surrounded by forests of pine trees. There’s no pool because of its montane location, but an in-room massage provides a little indulgence after a round of golf. Guests staying at The Manor gain access to this “members only” golf course and special accommodation and golf packages are available.

If you choose to stay at The Manor, you may not even want to leave the hotel to eat as Le Chef at the Manor is a superb restaurant which specialises mostly in Western cuisine, although a few popular local dishes are also served. Le Chef in the Manor has an acceptable wine list, but with prices that reflect its exclusive location.

After dinner, relax in the adjoining Piano Bar warmed by a log-fire and made more entertaining with live music. There are other restaurants, bars, and fast food outlets at the intriguingly named ‘Mile Hi Center’ within walking distance of the hotel, another reminder of the Rocky Mountains, echoing Denver, Colorado’s own mile-high elevation.

Unsurprisingly, Baguio can get quite cool in the evenings, and open log fireplaces are commonly found in The Manor. Indeed, with the likelihood of cool temperatures, bringing some warm clothing is advisable for evenings. There are a number of similarities between Baguio and the Cameron Highlands, so if you enjoy the Malaysian highlands, Camp John Hay is an easily recommended place to combine golf with various other recreational activities in a refreshing and cool mountain location. 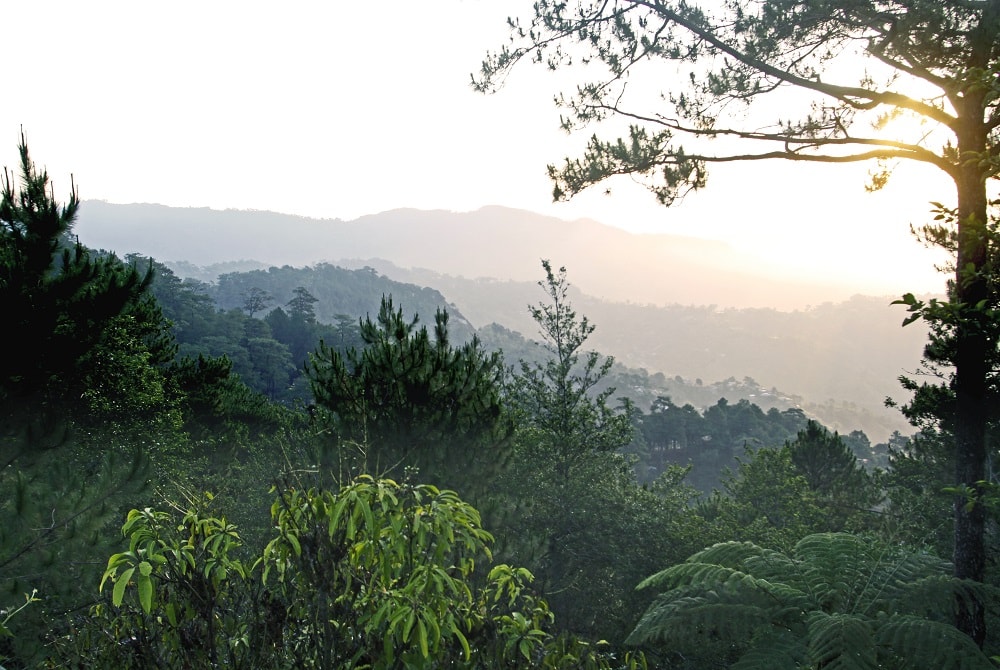 Getting there: There are several options for flying the 3.5 hours or so from KL to Manila, including Philippine Airlines, Malaysia Airlines, AirAsia, and Cebu Pacific. From Manila, it’s a five-hour road journey via the Subic-Clark-Tarlac Expressway to Baguio City. Annset Holidays (annsetholidays.com.ph) can arrange ground transfers to Baguio.

Where to stay: The Manor Hotel at Camp John Hay (campjohnhay.ph).

Best travelling times: June to October is the wet season, but cheaper hotel rates make it a popular golfing destination even out of season. Temperatures on the mountain range from 7°C to the low 20s.