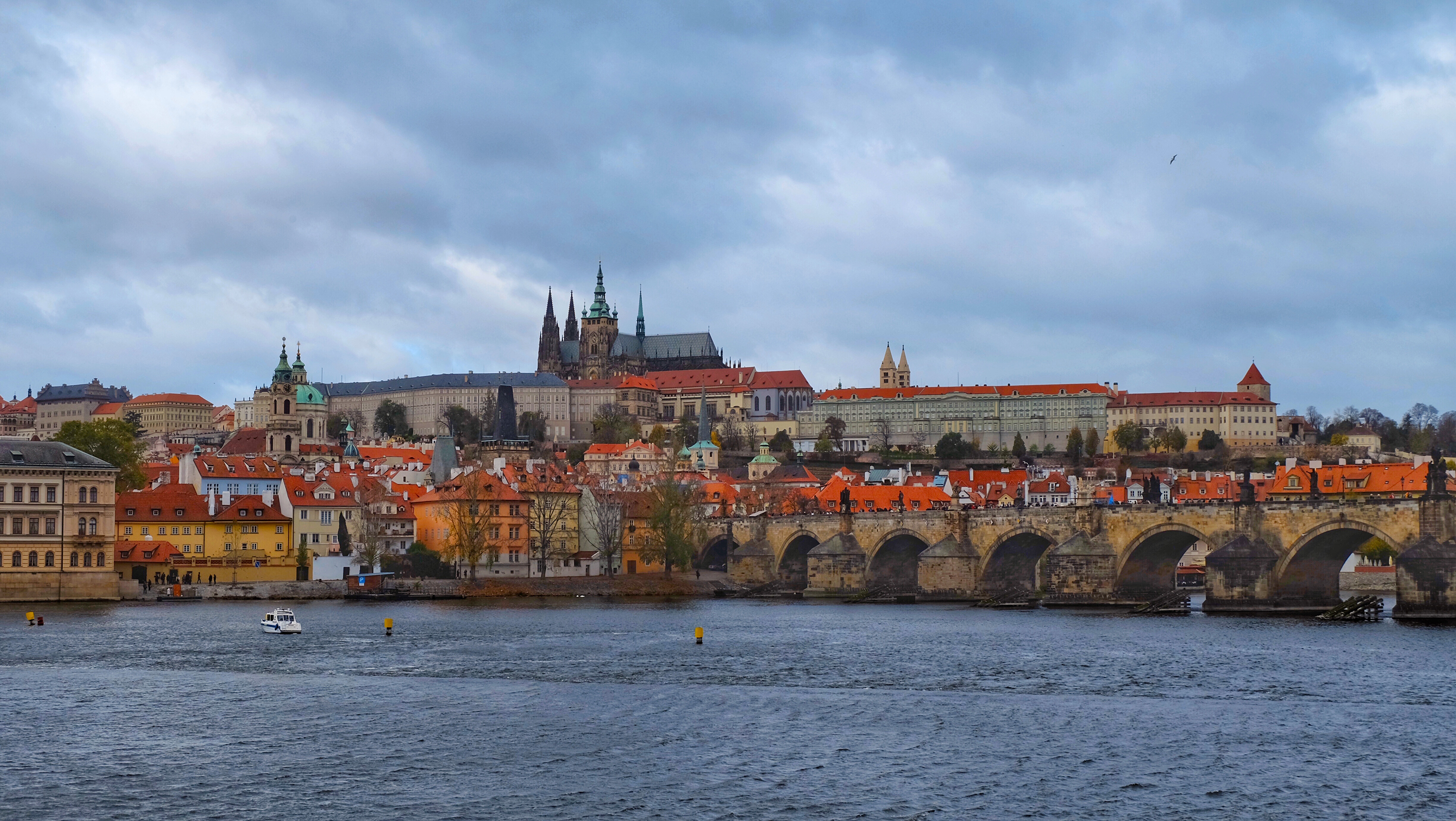 Known as the City of a Hundred Spires, Prague has long tempted travellers around the globe with its incredible charm and impressive Gothic architecture. Bisected by the Vltava River, Czech Republic’s beguiling capital city is home to dazzling churches, verdant green parks, underground pubs, and cosy cellar restaurants. Thorough research informed me that next to summer, fall is the best time to visit Prague for several reasons: significantly fewer tourists (winning point), the stunning shades of autumn foliage, and temperate weather. With that in mind, I was off!

A stroll on the iconic Charles Bridge was the perfect way to kick off my nine-day stay there; where Baroque-style statues glimmered in the soft light of sunset, bestowing this Eastern European jewel of a city with an allure unlike any other. The famous bridge is protected by three imposing Gothic towers and spans the placid river, connecting Old Prague to Mala Strana. The ambiance is remarkable by day, but come nightfall, the crisp air, soothing sounds of jazz from local musicians, and Prague Castle shining brightly against the evening sky all come together to make the atmosphere quite magical.

The city’s most popular structure, Prague Castle, rests on a hill at the end of the bridge, and it’s where all Prague journeys should begin. It is the largest ancient castle in the world, globally renowned for its astounding architectural design. Its twin spire church, St. Vitus Cathedral, is especially spectacular. Built over a span of almost 600 years, St. Vitus bears a pivotal significance to the religious and cultural life of Czech Republic. Within, the nave is resplendent with colour from stained-glass windows depicting the lives of St. Cyril and St. Methodius, which were created by eminent Czech artists of the early 20th century.

What to see, what to do

Take a step back in time and traipse around the Old Town Square. The tourist-popular area, no matter the season, is one of the most beautiful squares in Europe and brims with magnificent historical façades; some of its Gothic buildings date back as far as the 14th century. The Old Town Hall Tower, erected in the early 1400s, stands gallantly in the heart of the square and houses one of the city’s most identifiable icons, the medieval-era Prague Astronomical Clock (which was under renovation at the time of my visit). If you’re visiting during the colder seasons, be sure to pick up a cup of Svarak (mulled hot wine) from the vendors around the square and sip the delicious beverage as you explore the area.

Strahov Library is a must-visit for history lovers, as it is the largest monastic library in the country. The lobby outside the hall contains an 18th-century Cabinet of Curiosities (something you would think was imagined by J.K. Rowling) filled with unusual contents such as the shrivelled remains of sea creatures, a narwhal horn, a dodo’s remains, and many other fascinating oddities. There are about 200,000 old prints – mostly from the 16th to 18th centuries – with over 3,000 manuscripts and 1,500 first prints. There are also two splendidly decorated halls within the premises, the Theological Hall and the Philosophical Hall. 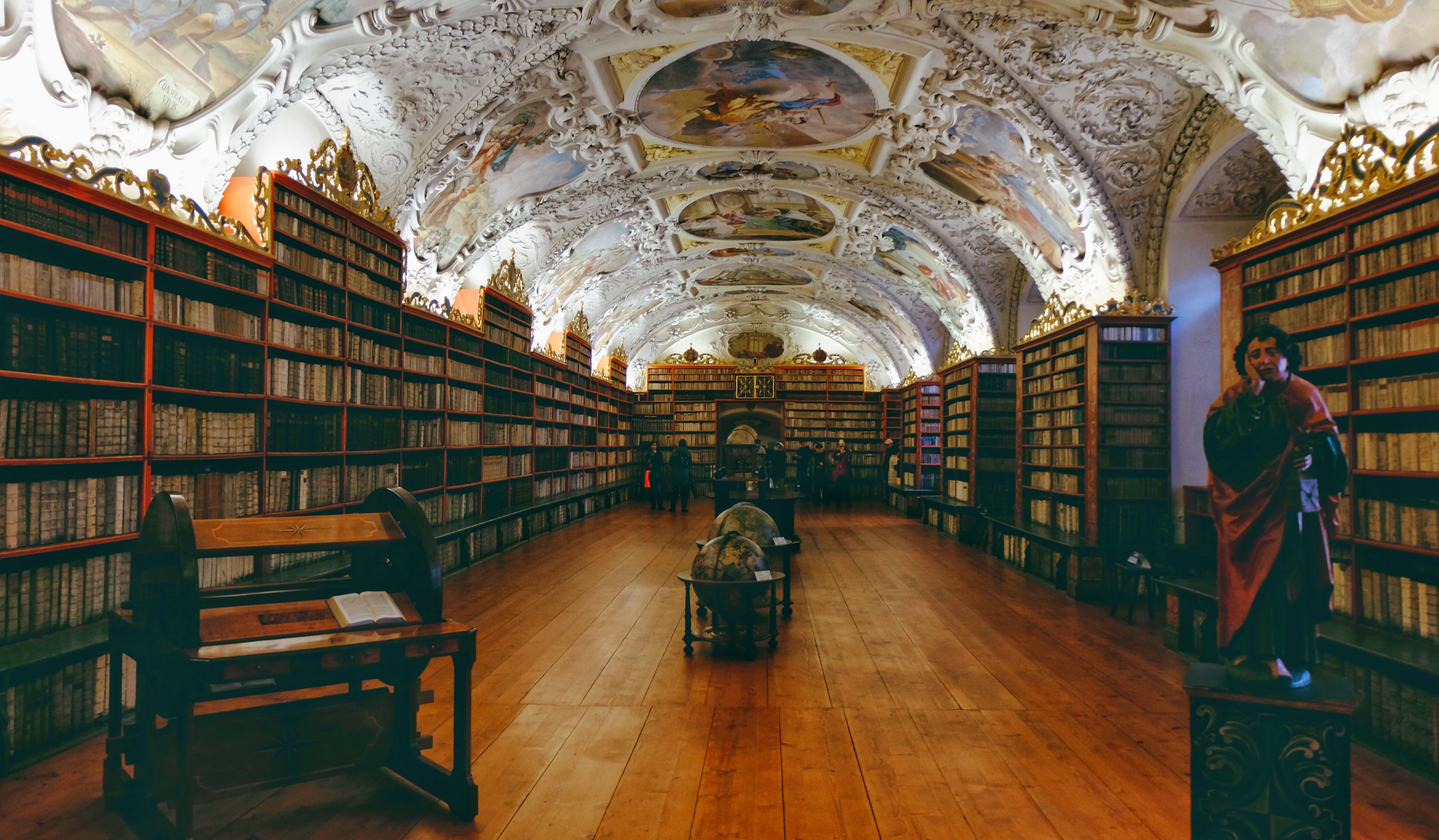 The corridor leads to the older but immensely beautiful Theology Hall. The low, arched ceiling is encrusted in ornate baroque stuccowork, and is now one of the oldest of its kind on Earth. There are over 18,000 volumes stored here, with the northern wall containing nothing but different editions of the Bible or parts of the Bible in many languages. Walk down the corridor to the spectacular interior of the two-storey-high Philosophy Hall on your left. It was built to accommodate the carved and gilded, floor-to-ceiling walnut shelving that was rescued from another monastery in South Bohemia. As I gently traced my fingers on the spines of the books, some dating back to the 14th century, the great importance of writing our stories swept over me.

Travel tip: The number of visitors to the interiors of Strahov Library is capped at 100 persons a day. If you plan to visit it, ensure that you call or email in library personnel at least two weeks in advance with your travel date and time to avoid disappointment. 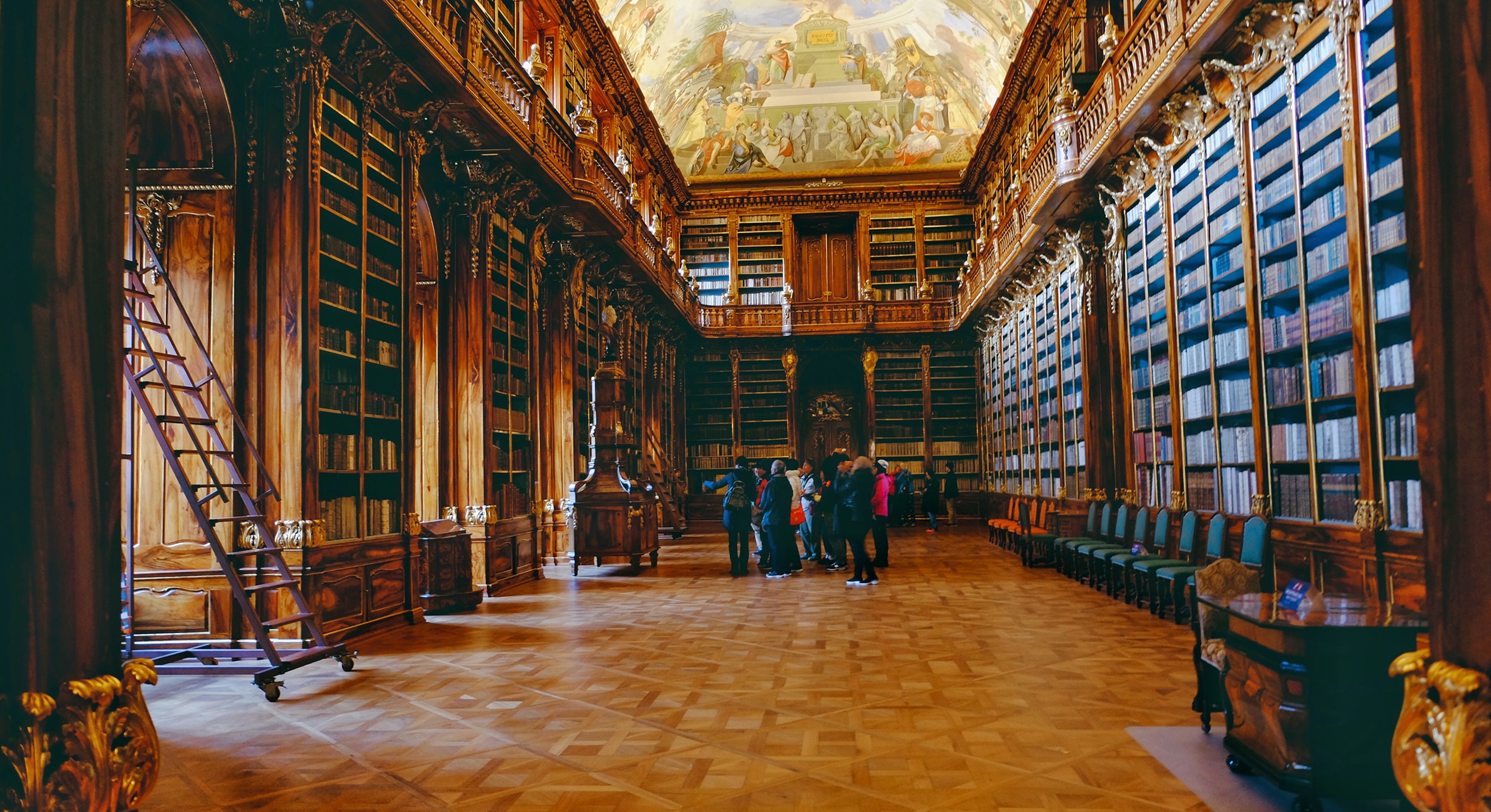 For some of the best views, a trip up to Petrin Hill for a panoramic 360-degree view from the top of the tower is not-to-be-missed. At 1,043 feet high, you can either hike up (a total of 299 steps to get on the top) or opt for a ride up with the funicular. Perched at the summit of Petrin is an observation tower that bears a striking resemblance to Paris’ Eiffel Tower. In the fall, take in the view of the historical city in shades of gold, tinges of copper, and flashes of crimson, setting the scene for an unforgettable memory.

Aria Hotel: A dulcet to the senses and soul 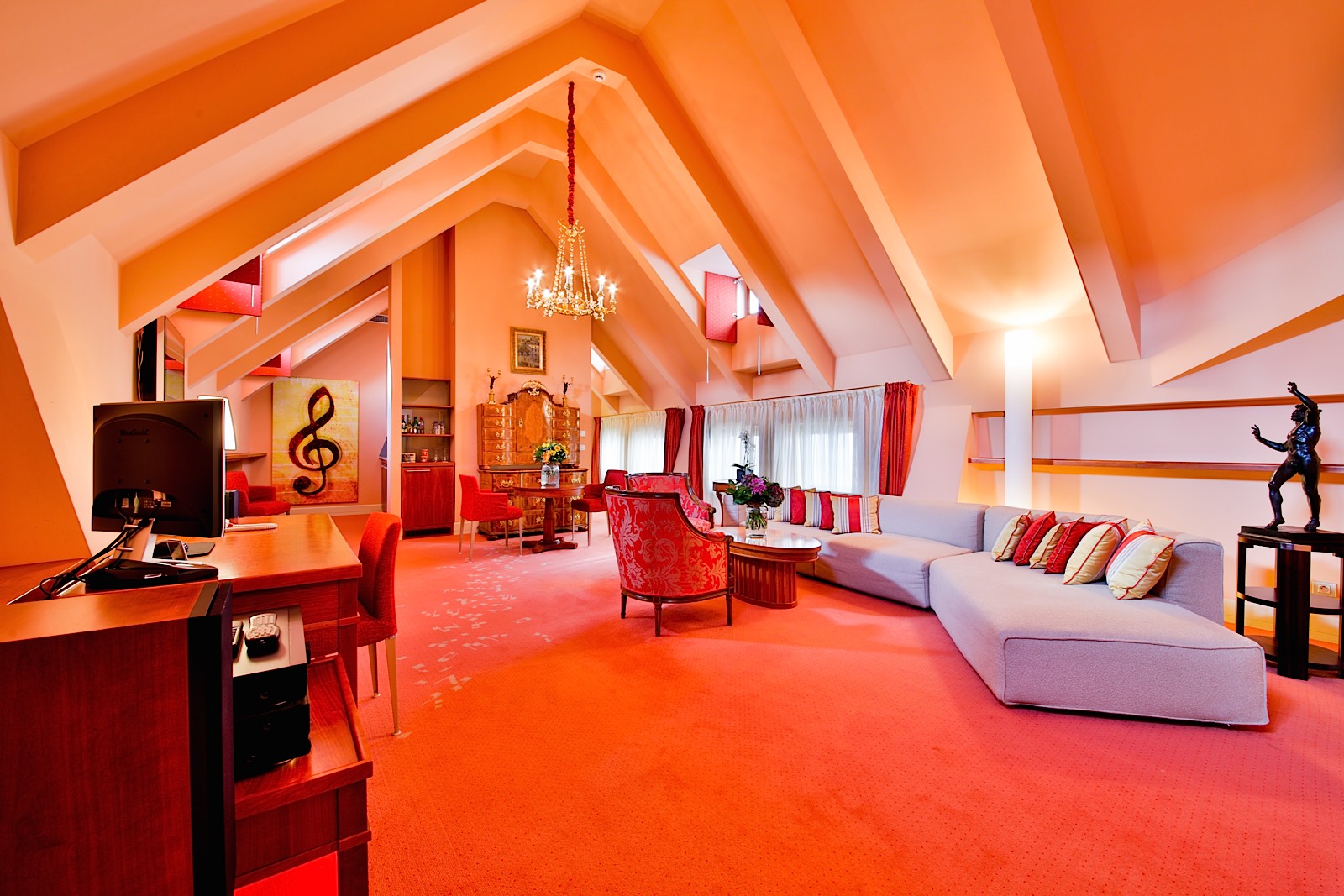 One of the suites (Image credit: Courtesy of Aria Hotel) 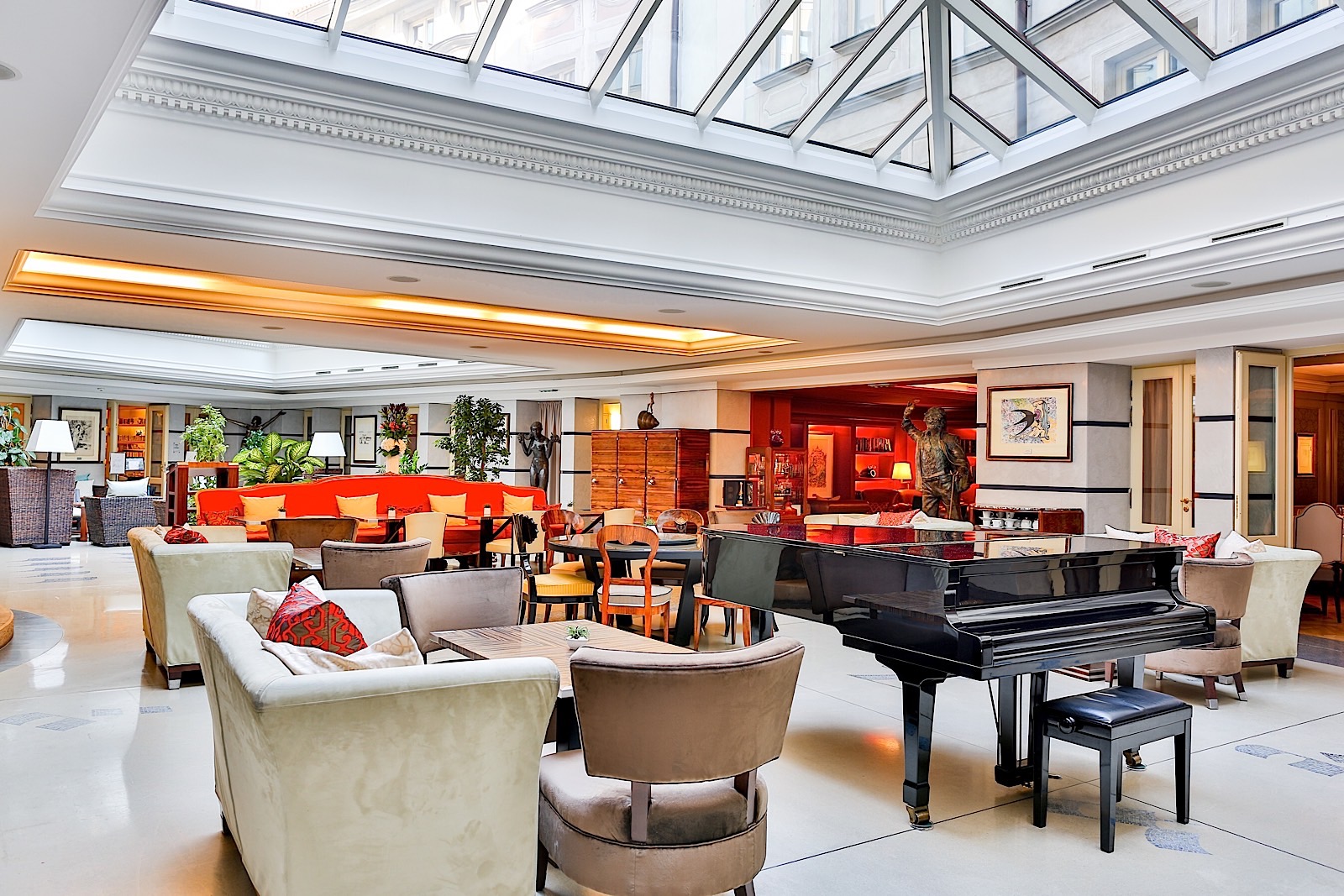 Located within walking distance of the castle and many of the city’s most beloved landmarks, the musically-themed Aria Hotel is a welcome reprieve to the senses and soul. Spread over four floors, Aria’s accommodations pay homage to some of the greatest music and musicians of all time. Each floor is themed by genre – Contemporary, Classical, Opera, and Jazz – and each one of the plush 51 rooms and suites is dedicated to a specific musician. The Mozart Suite, bathed in peach tones, overlooks the Vrtba Garden, Prague’s oldest baroque garden and a landmark on the UNESCO World Heritage List, which I was fortunate enough to enjoy it the day before it was closed for winter. 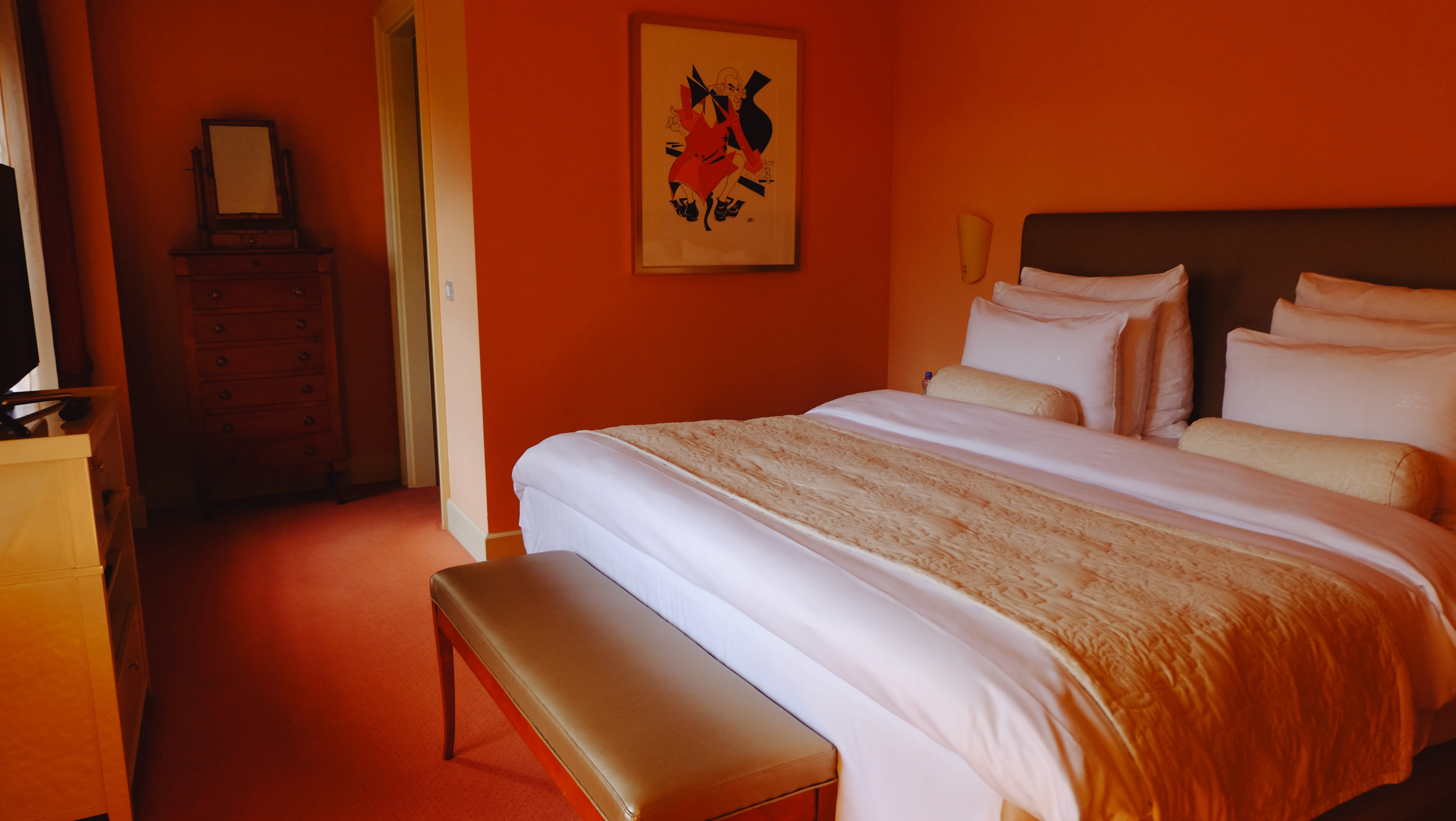 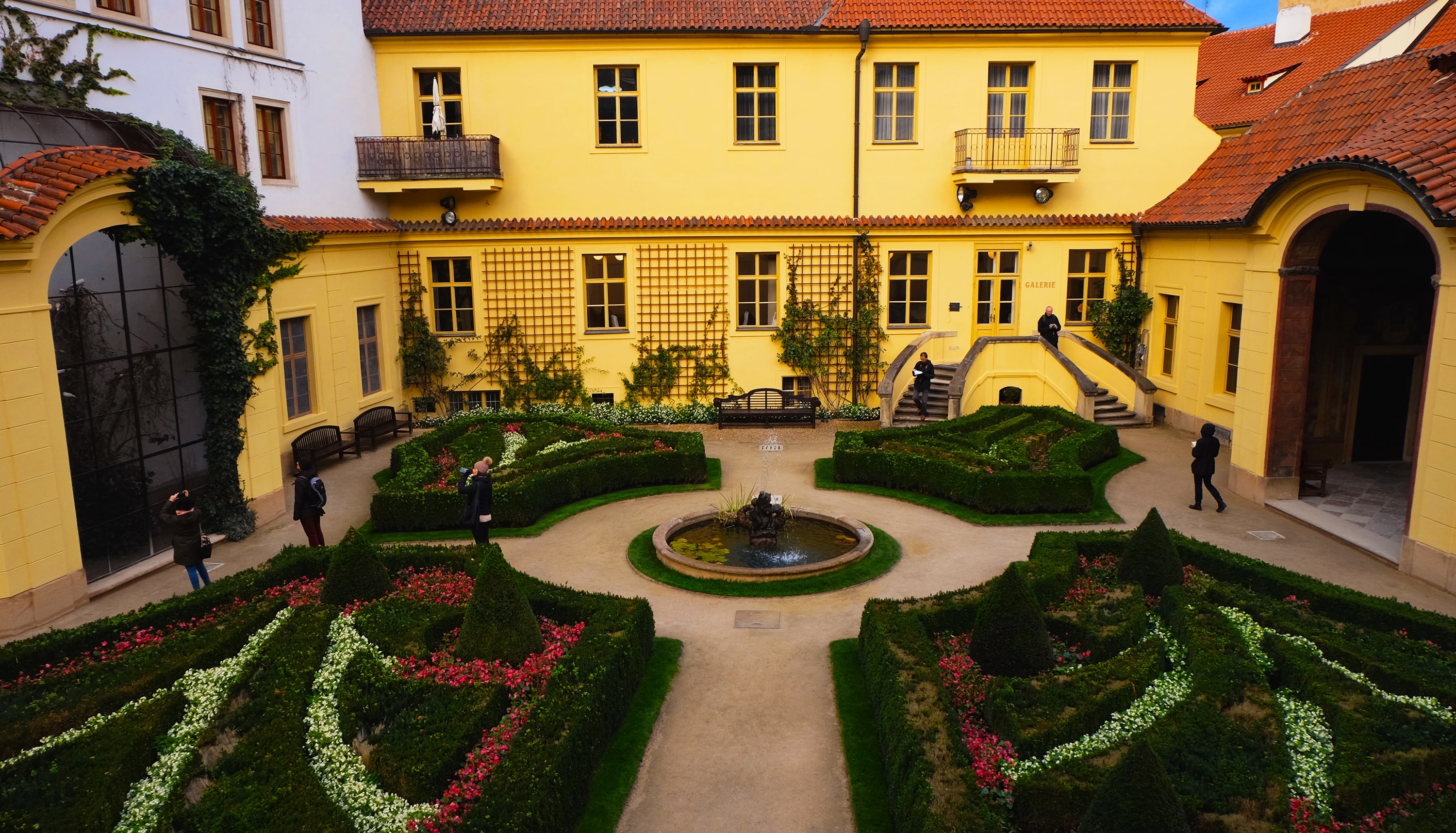 The gorgeous hotel has welcomed the likes of President Bill Clinton, the King and Queen of Belgium, and most recently, Placido Domingo, and it was easy to see its appeal: It was an experience of thoughtful hospitality and artful beauty wrapped in one elegant package. 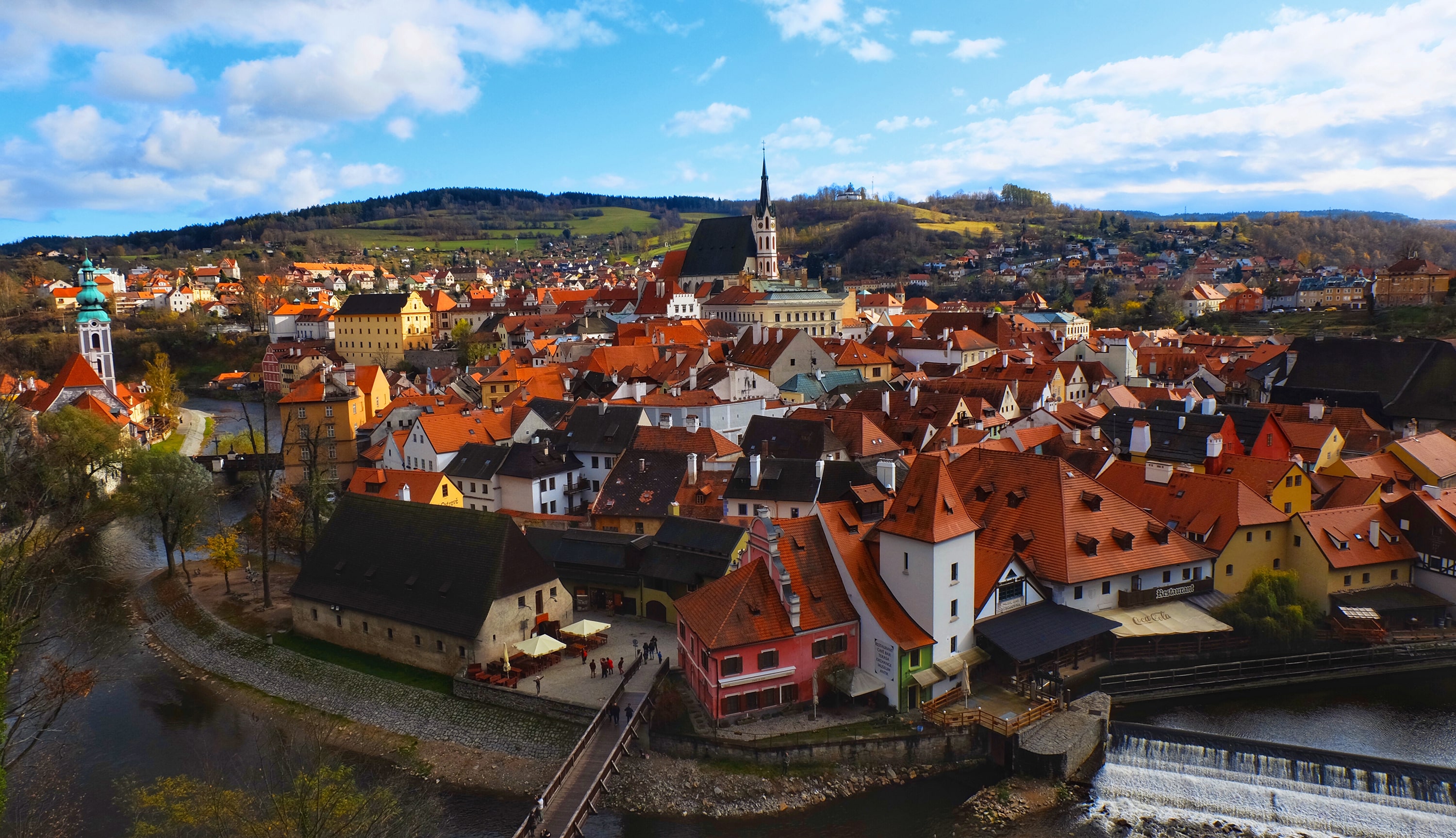 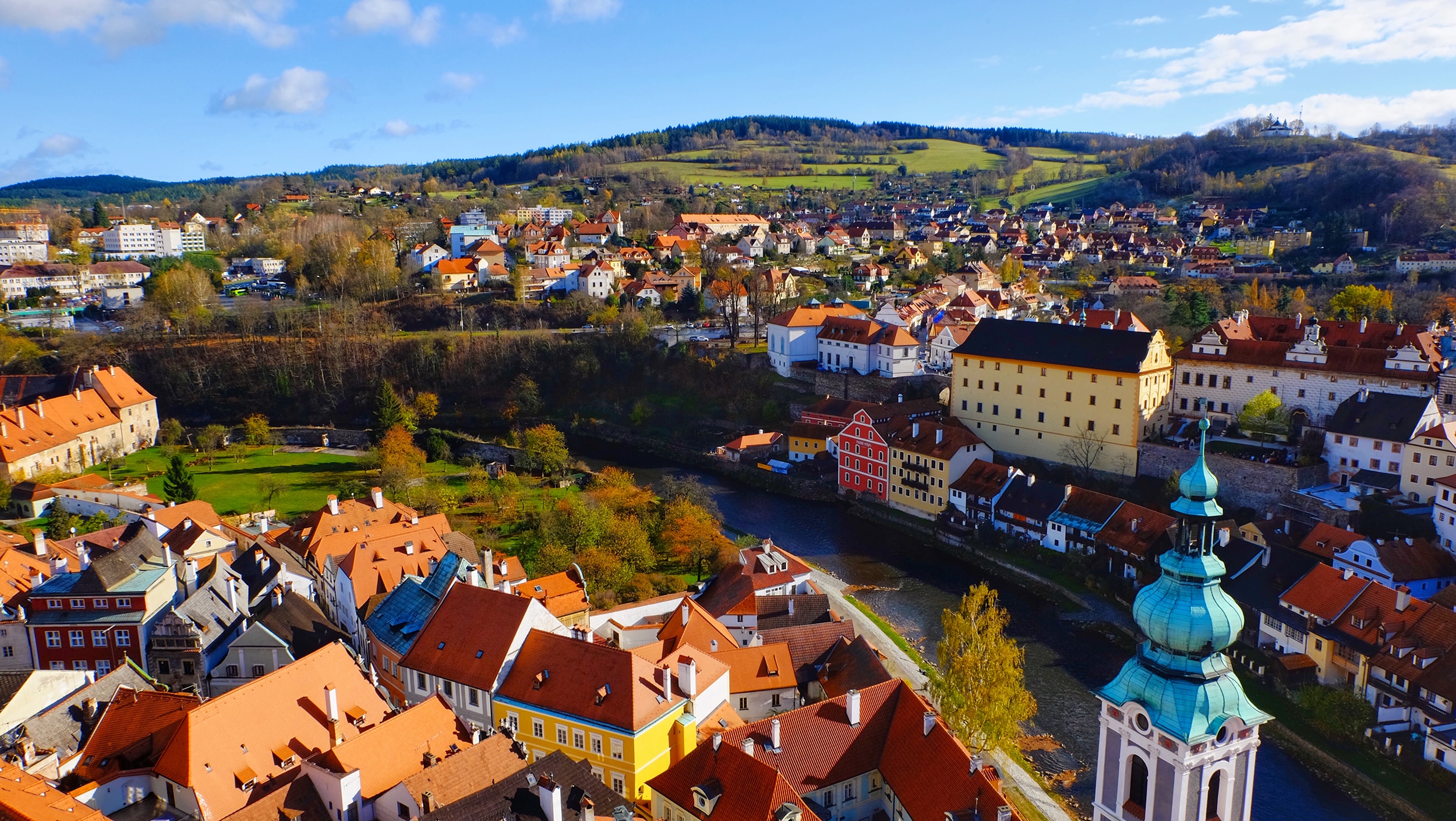 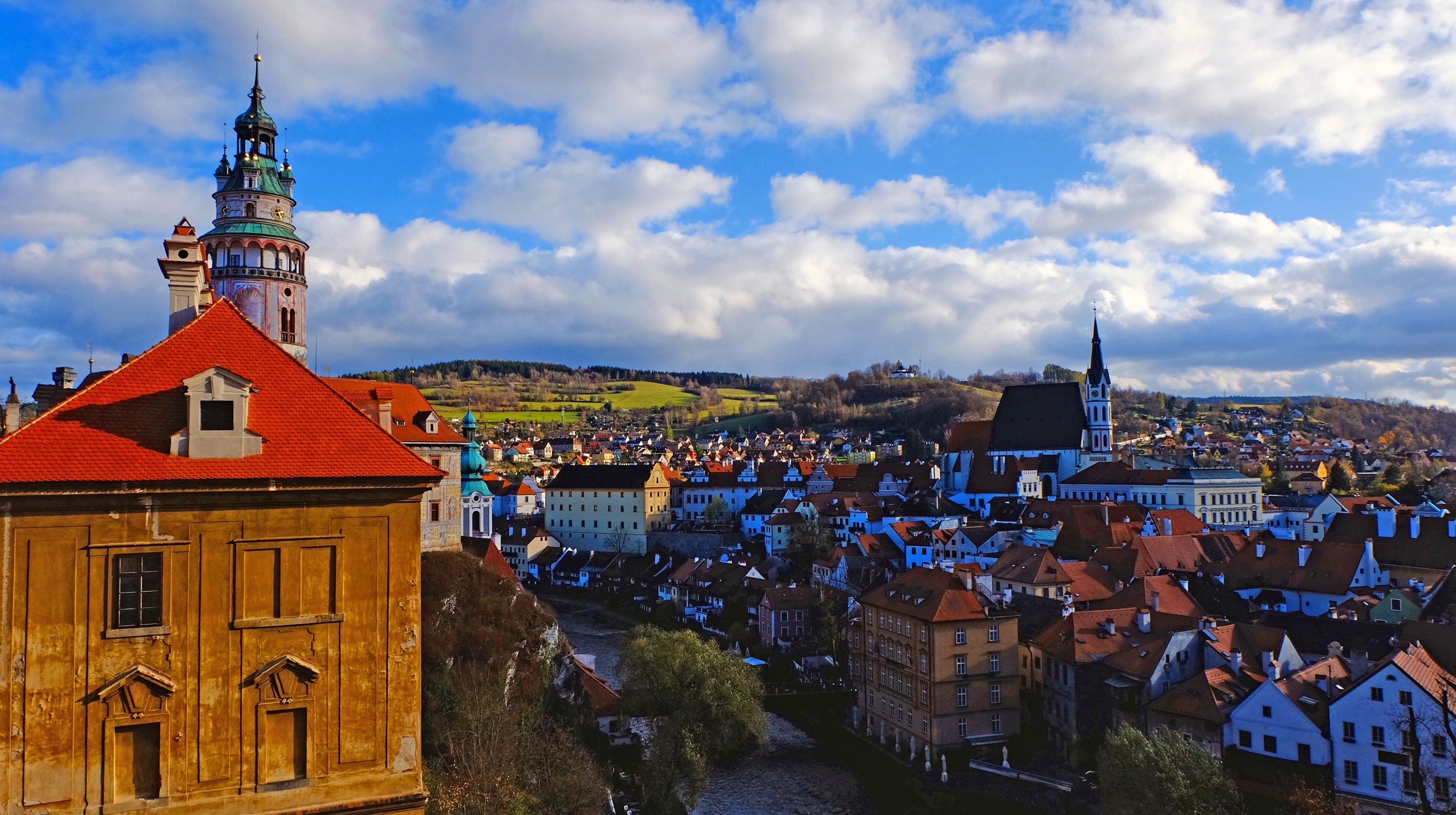 One of the most picturesque towns in Europe and a UNESCO World Heritage Site, Cesky Krumlov is located in the southern region of Bohemia. Fall’s glorious draping of colour brought a striking depth to the town’s existing mix of Gothic, Renaissance, and Baroque architecture. Getting around the charming town is relatively easy; you’ll be able to cover it within a day. Head up to the Castle Tower for a lovely view of the fairytale town, have lunch in a tavern by the river, or walk into one of the bars for a pint of the local brew – you won’t go wrong with any one of the above. Better yet, do all three.

Once the sun fades, the smell of wood intensifies and the restaurants come alive with warm lights and even warmer fireplaces. Most of the buildings were constructed hundreds of years ago and have stood upon their foundations for many generations.

The journey from Prague to Cesky Krumlov will take about three hours each way, but I highly recommend staying at least one night to get the most out of your time there. Buses to Cesky Krumlov from Prague depart from the Na Knížecí station, at an hourly interval on a daily basis, from 6:00 am to 9:00 pm.

Travel tip: If you are travelling with some luggage, you can stow it at the Tourist Information Centre of Cesky Krumlov for a nominal fee and then explore the town unencumbered. 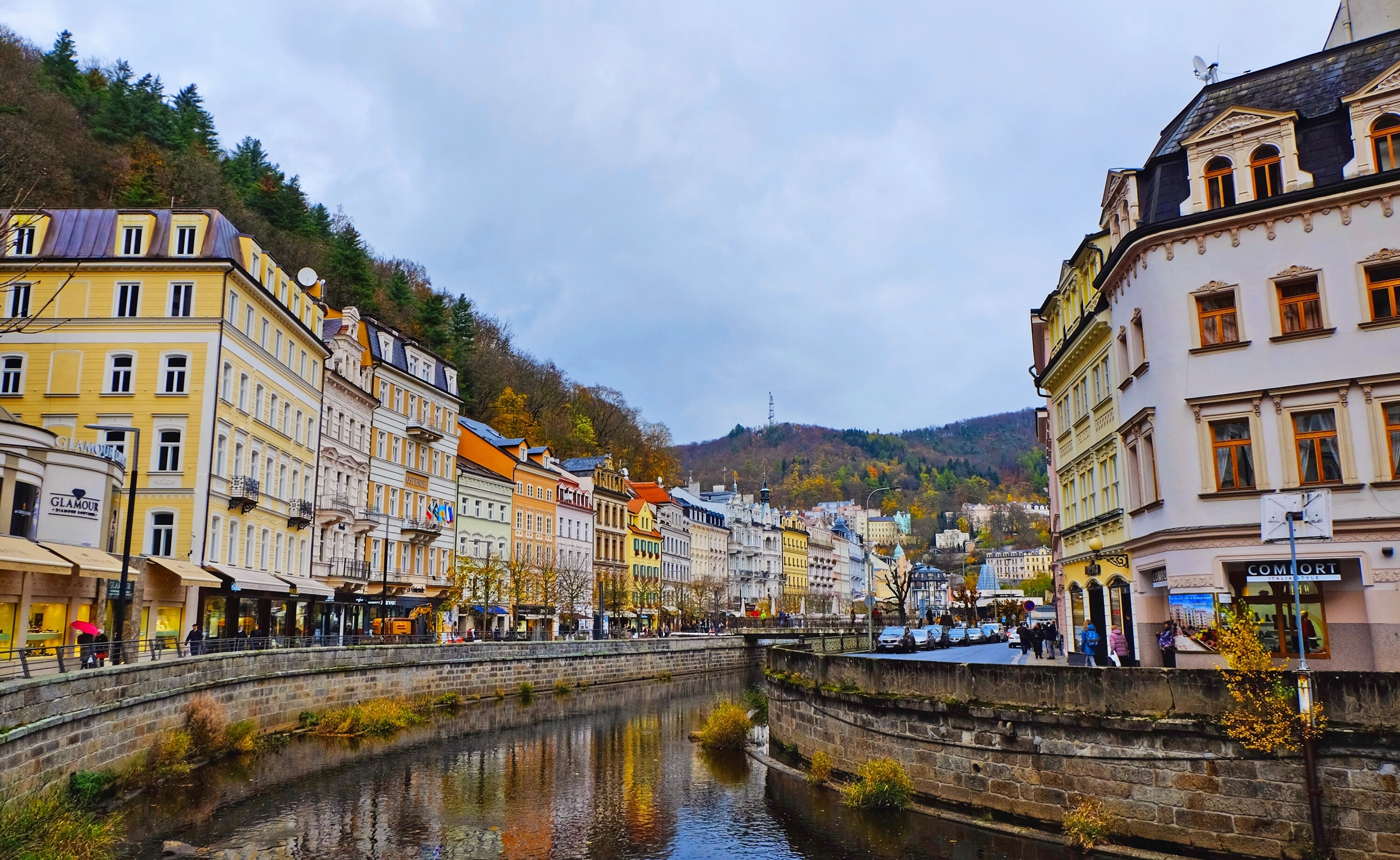 Karlovy Vary, with Tepla River snaking through the town.

Karlovy Vary (also known as Carlsbad) is a serene spa town in the western region of Bohemia, and it has played host to countless visitors flocking to sip ‘curative waters’ from the natural hot springs that run underneath its surface. 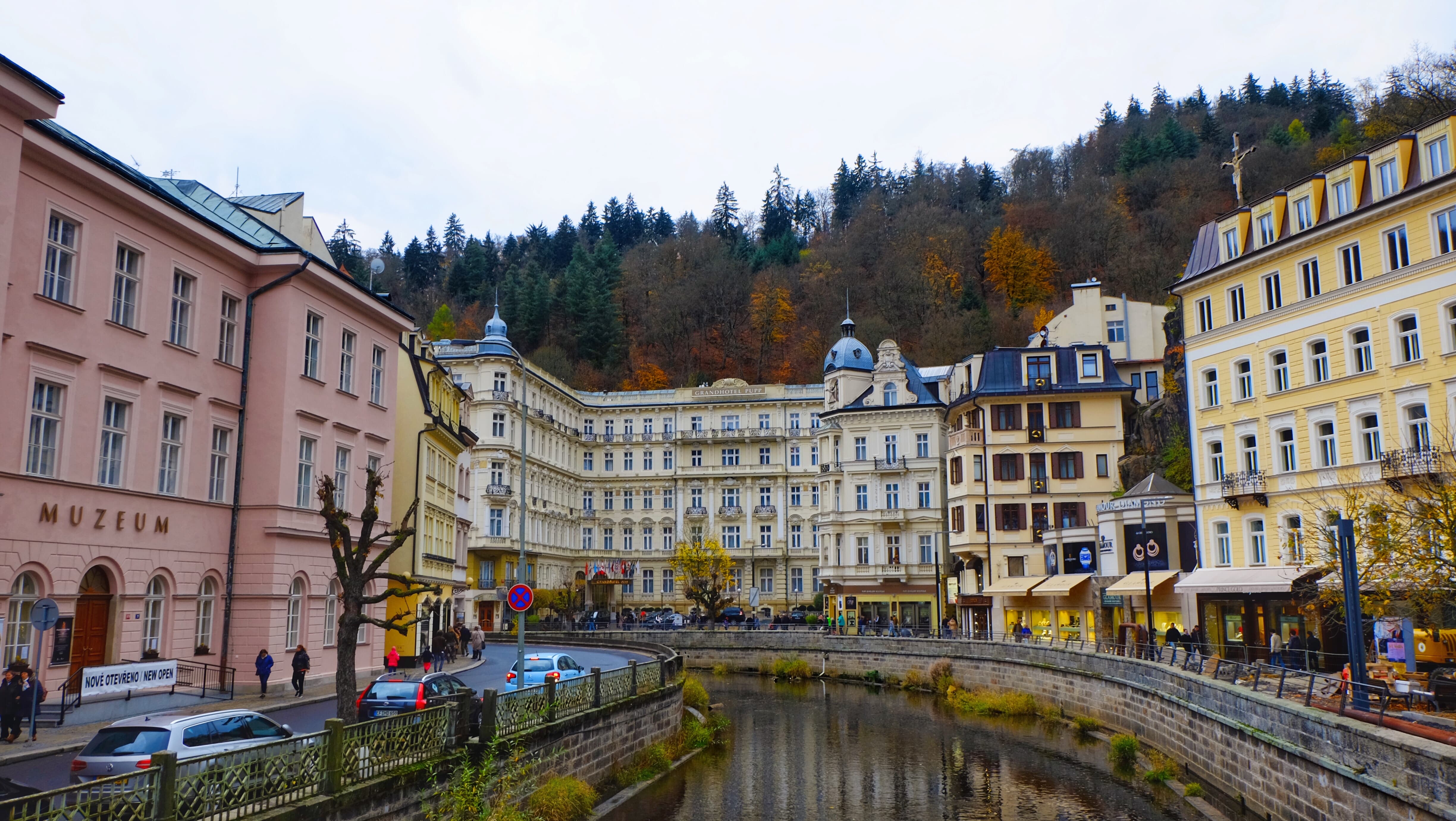 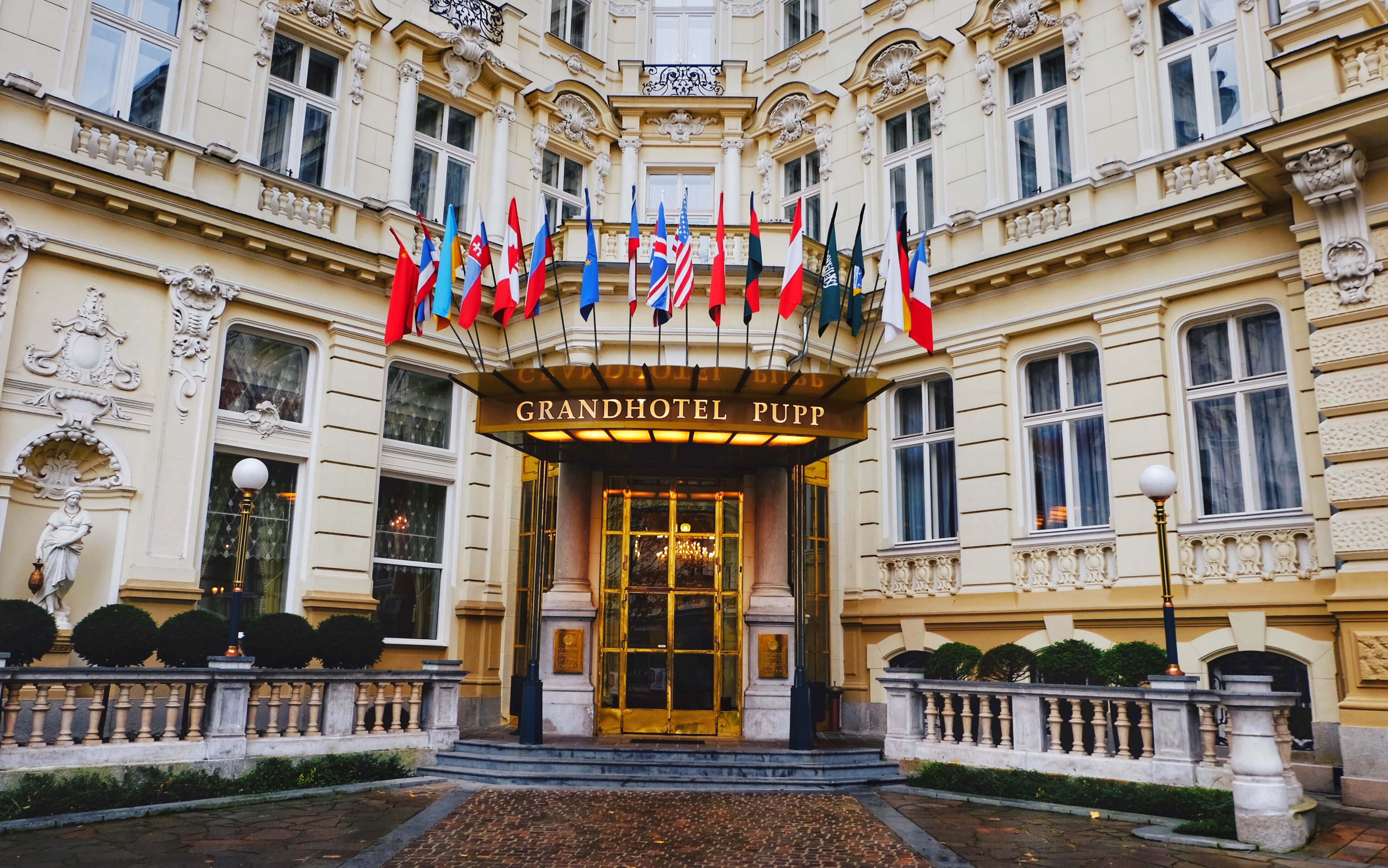 I began my journey at the majestic Grandhotel Pupp, the inspiration for Wes Anderson’s The Grand Budapest Hotel, and one of the key filming locations for Casino Royale. The stately hotel opened its doors in 1701 and has been the dwelling of choice for countless celebrities both historical and contemporary, including Johann Sebastian Bach, Ludwig van Beethoven, Napoléon Bonaparte, Robert De Niro, Sharon Stone, and Helen Mirren, just to name a few. The lavish baroque Festive Hall opens its arms to A-listers annually for the prestigious International Film Festival. If a night at this opulent estate isn’t in the books, a drop-in for a meal at the Grandrestaurant Pupp or Cafe Pupp for the one-of-a-kind Pupp Cake (made from candied orange, shredded coconut, and Becherovka, a locally made liqueur) for a five-star dining experience is certainly encouraged. 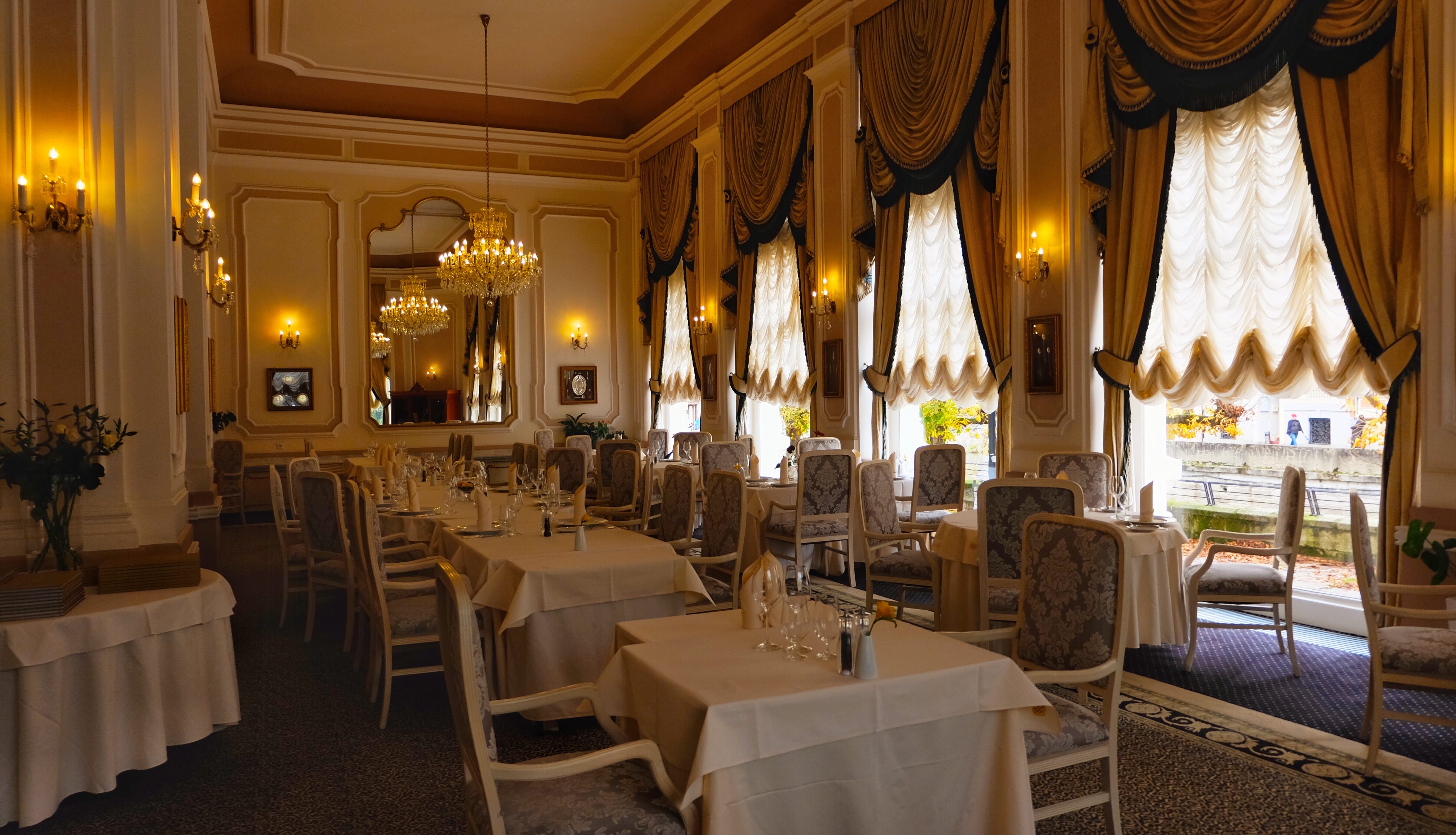 Wandering around town along the Tepla (which means warm in Czech) River was a delight – the exquisite Baroque and Art Nouveau architecture, the gentle flair of glamour, and bounteous, bubbling thermal springs are a sight to behold. As you roam the captivating town, do indulge in the tradition and buy one of the porcelain cups that are sold in the kiosks, fill it up, and sip the mineral-rich drink at Mill Colonnade, the largest colonnade in Karlovy Vary, dating all the way back to the 17th century. 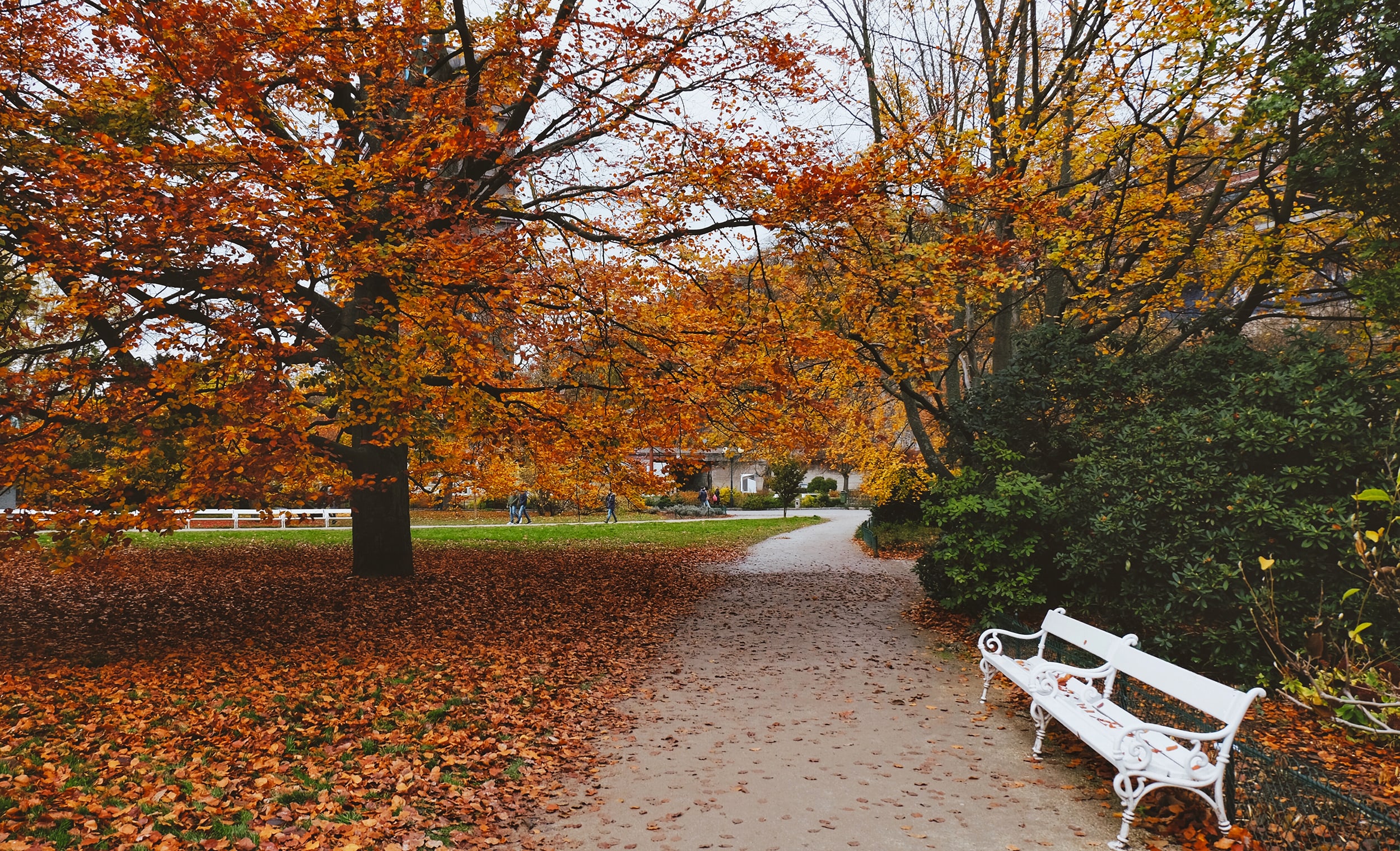 End the day at one of the white benches at Dvořák Park, a sprawling park with a lovely lake, massive weeping willow trees, and a Viennese-style pavilion. 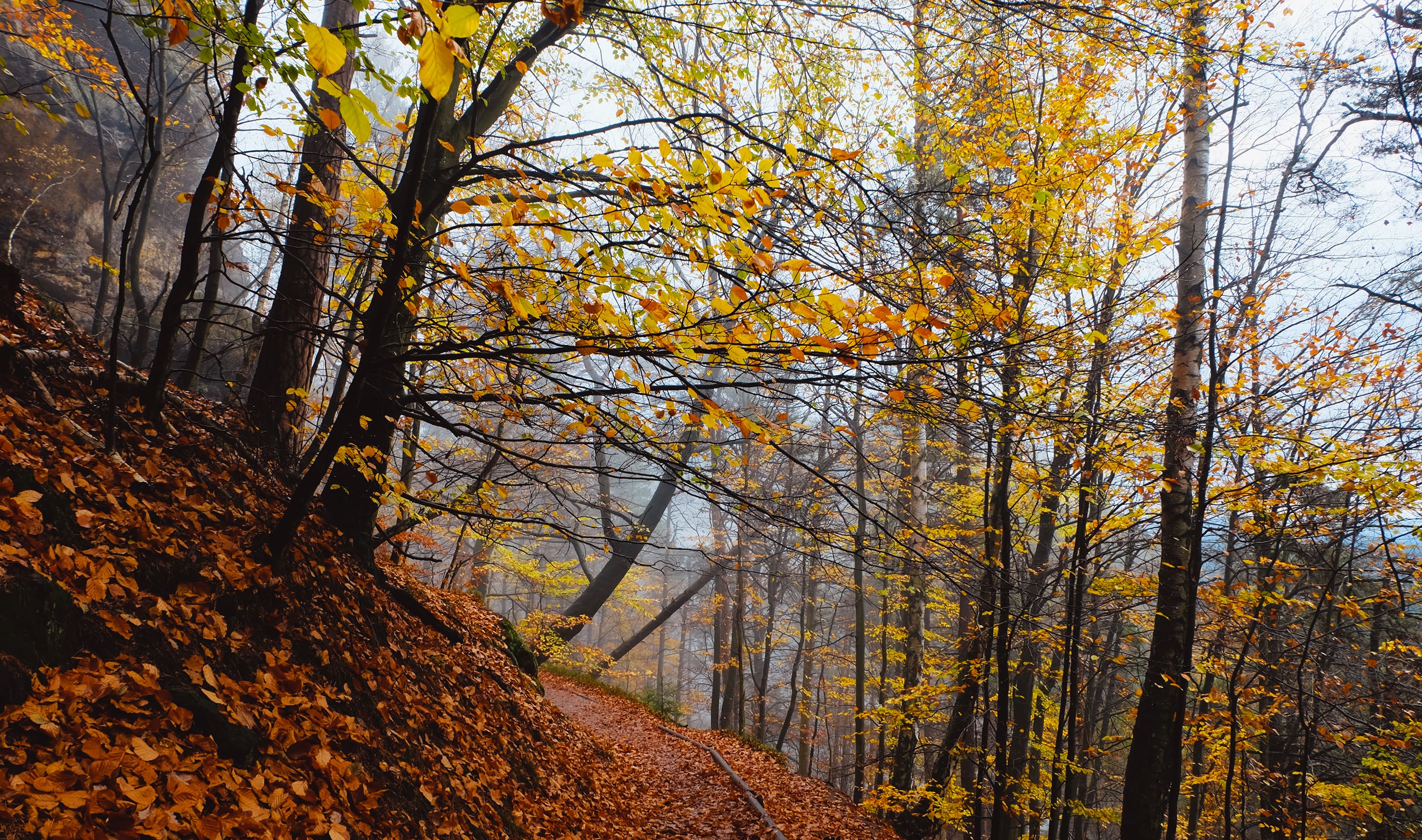 View along the hike to Pravcicka Brana

Considered as one of the most beautiful natural areas in Czech Republic, Bohemian Switzerland is home to breathtaking ravines, deep valleys, steep footbridges, and impressive rock labyrinths. Situated in the northern region of Czech Republic, Bohemian Switzerland is, curiously enough, nowhere near Switzerland. The name came about some time back in the 1800s when two Swiss artists realised how much a particular area in the north of the Bohemian Kingdom (now Czech Republic) reminded them of their home country. The name stuck, and it has endured to this day. 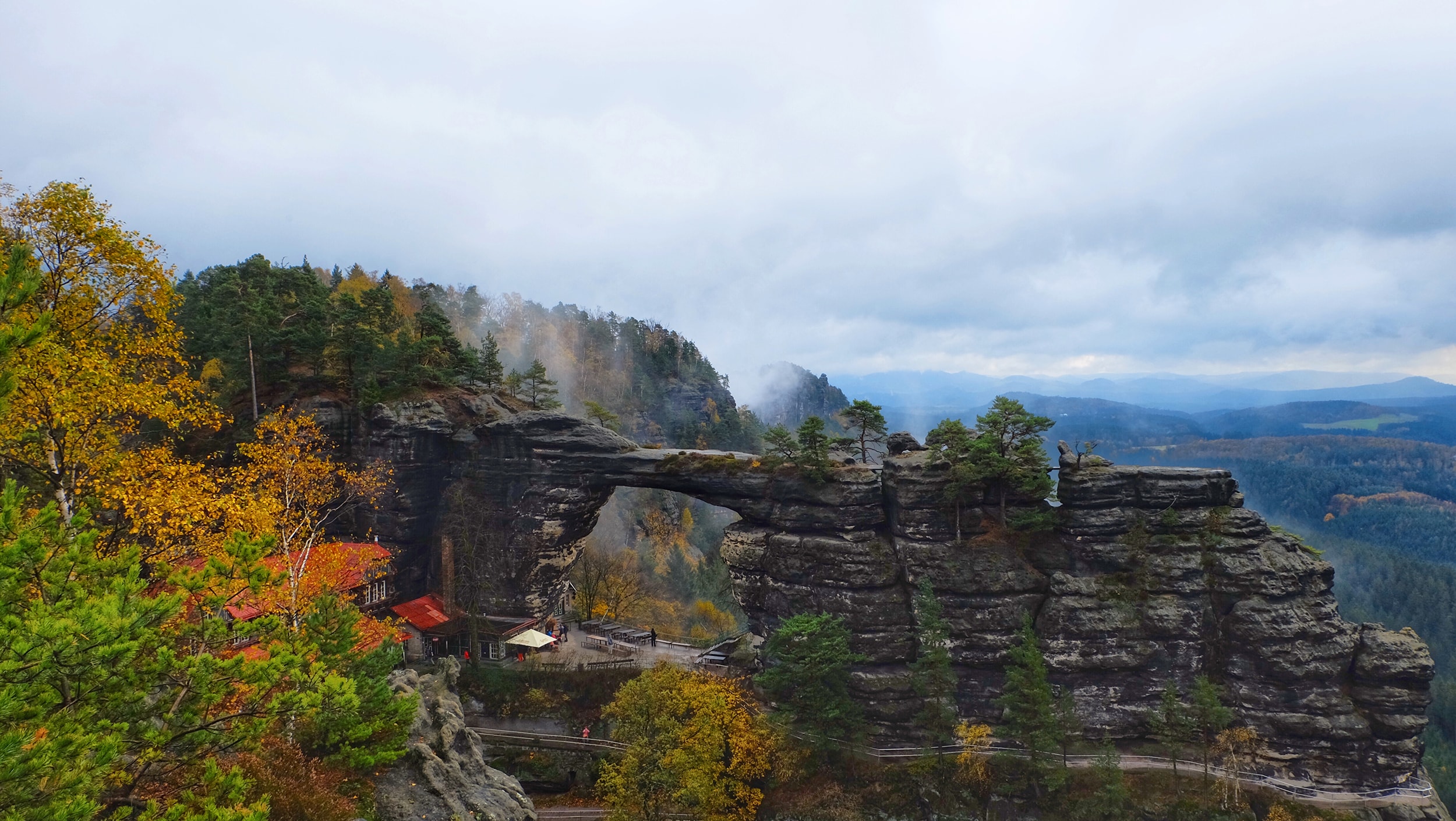 Among one of the many highlights of the region is the Pravcicka Brana, the biggest natural sandstone arch in Europe, which is reachable only on foot. 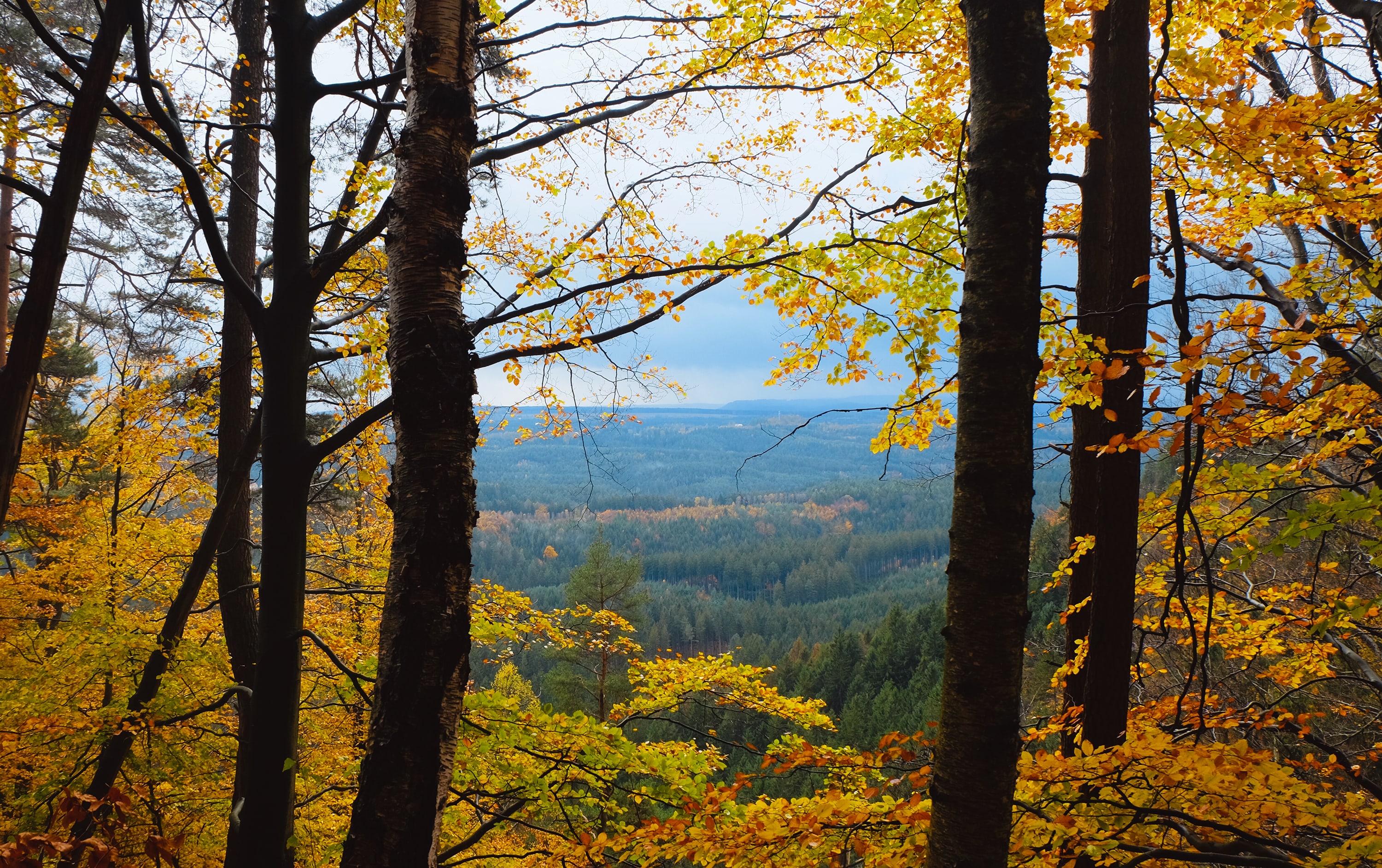 We began our hike at 10am local time in fall’s chilly and rainy weather (it was 6°C) for approximately three hours. Just as my legs were about to give out, we arrived at the cliff top near Mother Nature’s masterpiece, soaking in its grandeur from above. The cliff opposite the arch rewarded us with sweeping views of the lush Czech countryside, and a cheeky peek into Germany’s border.

After a hearty lunch and with no time wasted to revel in any post-lunch relaxation, we headed out for our dinghy ride at the Gorges of Kamenice, an idyllic valley carved out of sandstone; its walls draped with moss, lichen, and leaves. The relatively easy trail (downhill this time, thank goodness) along the left bank of the Kamenice was mesmerising, and can be hiked on foot, aside from two areas, which can only be entered via a dinghy. Our boat glided over calm waters, taking us through untouched gulches. This day trip was a once-in-a-lifetime experience, and one which outdoor enthusiasts should definitely try out.